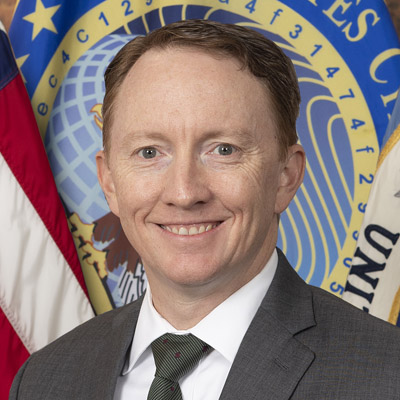 Prior to this role, Dave served as Deputy Director of the newly established Cybersecurity Directorate, charged with preventing and eradicating threats to U.S. National Security Systems and critical infrastructure. He served as Chief of Strategic Counter Cyber Operations (SCCO) in the Cybersecurity Operations Group from 2016 to 2018. He represented NSA at the National Security Council Policy Coordination Committee for cyber matters and oversaw efforts to develop whole-of-community counter-cyber strategies, strategic cybersecurity products, and operations optimization methods.

After serving in the United States Army as a signals intelligence (SIGINT) analyst and Korean linguist, Mr. Frederick joined NSA as a language analyst in 1996. He held a number of managerial, strategic planning, and technical positions at NSA prior to promotion to the Defense Intelligence Senior Executive Service. From 2005 to 2008, he served as the Deputy Chief for Liaison, Special United States Liaison Advisor to a key foreign partner. He then served from 2008 to 2009 as the Director of the Community Electronic Intelligence (ELINT) Management Office, followed by duty as the Associate Deputy Director for Technical SIGINT & Electronic Warfare. From 2010 to 2012, he served as the NSA/CSS Deputy Inspector General, overseeing audits, inspections, and investigations. From 2012 to 2015, Mr. Frederick served as a special U.S. Liaison Advisor at an overseas location. Upon returning to the U.S. in 2015, he became the Chief of Targeting Strategy and Mission Integration for the SIGINT Directorate. In this position, he led efforts to improve NSA/CSS’s SIGINT missions and cyber support by planning, managing, and assessing access, collection, and targeting capabilities.
Mr. Frederick received numerous honors for his work; he was awarded Presidential Rank Awards (Meritorious Executive) in 2012 and 2017; the National Intelligence Superior Service Medal; a key foreign partner’s National Security Service Medal; and the NSA/CSS Meritorious Civilian Service Award, along with other Joint and Army military awards.

Mr. Frederick completed the Defense Language Institute Korean Basic Course in 1990. He graduated from the University of Maryland University College in 1994 with a Bachelor of Arts degree in History (Honors). He received his Master’s degree in Business Administration (Finance) from Colorado State University in 1998. He is also a 2010 graduate of the Defense Policy Seminar, National Security Studies Program from George Washington University.