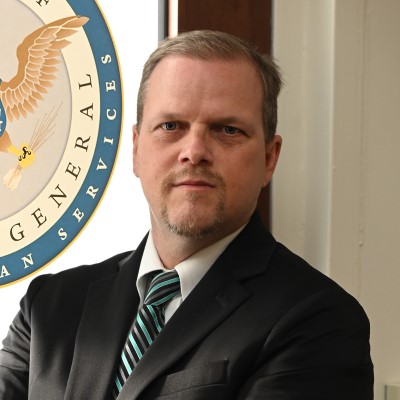 Mr. Caron is the Chief Information Officer (CIO) / Assistant Inspector General of Information Technology (AIG/IT) for the Office of Inspector General (OIG) at the Department of Health and Human Services (HHS) as of May 2021. Mr. Caron has over 24 years of information technology (IT) experience. He began his career in the US Army working in hands-on technical positions serving for 7 years.

Previously he has served as the Director of Enterprise Network Management (ENM) within the Directorate of Operations in the Bureau of Information Resource Management (IRM) at the Department of State (DOS) since June 2016.

Mr. Caron then spent 2 years as a contractor with the federal government, where he acquired more refined technical skills and a more detailed understanding of IT operations. He joined the federal government at the Department of State (DOS) in 2003 as a Systems Administrator. He has held multiple positions at the DOS, moving from managing small technical groups leading up to Director for ENM.

One of his most significant accomplishments was acting as the technical liaison during a major cyber security event at the Department. His leadership allowed the Department to resolve the incident as quickly and effectively as possible with minimal impact to the mission.

Mr. Caron is a co-chair on the CIO’s Innovation Counsel for Zero Trust as well as co-chair for ATARC.org Zero Trust Working Group. He previously chaired ATARC.org Trusted Internet Connection (TIC) 3.0 Working Group which resulted in 8 vendor proof of concepts being delivered to government participants.

Mr. Caron has been recognized for the FedHealthIT 100 2022 award for his work as well as received award GovCIO 2022 Fed IT Flycademy Award for “Zero Trust Advocate of the Year”. He completed his associate degree (Magna Cum Laude) in Computer Information Systems, Network Administration from the Northern Virginia Community College. At the Department of State, he also has received training in Executive Potential Program from the USDA Graduate School in 2009 and Advanced Leadership Skills in 2014. He received his certification in May 2020 as a Forrester Zero Trust - Strategist (ZTX-S) and received his Federal IT Security Manager Certification (FITSP-M) in 2017. Mr. Caron has received numerous individual awards for his exceptional service since 2004.