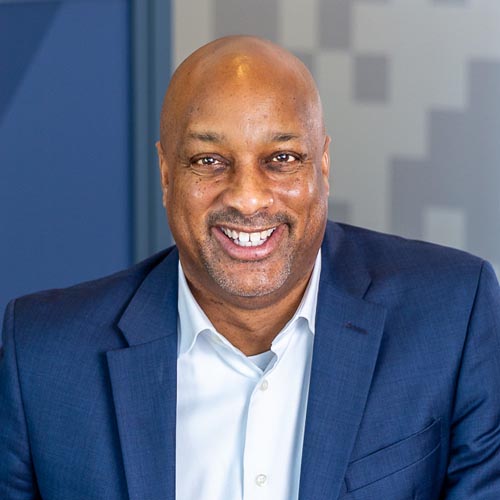 David leads AWS’s US Government, Nonprofit and Healthcare businesses. He and his teams help Governments, NGOs, Nonprofits and, Healthcare providers realize the potential of technology to transform their organizations and fulfill their missions. In this role, he works closely with national security clients, civilian and defense agencies, nonprofits and hospital systems on their journey to cloud technology. David is an experienced executive and impactful leader in the information technology sector and for more than 20 years, he has passionately focused on the intersection of technology and organizational change.

Prior to joining AWS, David worked for Apple Inc. for 12 years and led the teams that helped government adopt innovative mobile technologies. Under his leadership, Apple’s government business grew nearly 300% in a 4-year period. As head of the U.S. public sector, he played a key role in the introduction and adoption of mobile apps and app stores in federal and state and local governments. David and his team were instrumental in helping the Air Force launch one of the first electronic flight bag initiatives on the iPad mobile device. The Air Force started with 18 thousand iPads and grew to over 100 thousand iPads in use. The reduction of paper and printing costs combined with fuel savings paved the way for improved operations and saved the government millions of dollars. Before joining Apple, David worked for Monster.com and helped lead its customer facing teams which played a key role in bringing automation and innovation to federal hiring and recruiting platforms. In addition to his executive career, David co-founded Sulla Technology Group. At Sulla, as co-founder and COO, he built a successful datacenter services company focused on higher education clients and state and local governments. Before founding Sulla, David started Empire Capital Management to focus on the investment needs of mid-market institutional clients. David currently serves on the Innovation and Research Board for Children’s National Medical Center in Washington, DC. He also serves as the Chair of the Space and Procurement council for the U.S. Chamber of Commerce and is on the Board of Advisors for Earth Day Network. His studies include a Bachelor of Science in International Economics from Texas Tech University. He and his wife Izumi have twin daughters and currently reside in the Clarendon neighborhood of Arlington, VA.