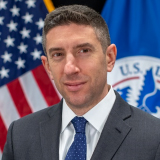 Eric Goldstein serves as the Executive Assistant Director for Cybersecurity for the Department of Homeland Security’s Cybersecurity and Infrastructure Security Agency (CISA) as of February 19, 2021. In this role, Goldstein leads CISA’s mission to protect and strengthen federal civilian agencies and the nation’s critical infrastructure against cyber threats.

Previously, Goldstein was the Head of Cybersecurity Policy, Strategy, and Regulation at Goldman Sachs, where he led a global team to improve and mature the firm’s cybersecurity risk management program. He served at CISA’s precursor agency, the National Protection and Programs Directorate, from 2013 to 2017 in various roles including Policy Advisor for Federal Network Resilience, Branch Chief for Cybersecurity Partnerships and Engagement, Senior Advisor to the Assistant Secretary for Cybersecurity, and Senior Counselor to the Under Secretary.