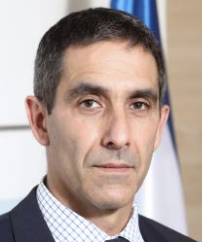 Mr. Gaby Portnoy, is the Director General of the Israel National Cyber Directorate (INCD). DG Portnoy was appointed by the Prime Minister in February 2022. Mr. Portnoy began his professional career in the intelligence field when he was recruited in 1988 to the Special Operations Directorate of the Intelligence Corps in the IDF. Portnoy served in the Intelligence Corps for over 30 years, where he held a number of senior commanding and management positions, which combine intelligence, operations, strategy and International cooperation development. Among the command positions he held: Head of operations in the Intelligence Corps, Commander of Unit 9900 and Head of the Planning, Standards and Budgets Department at the Intelligence Corps. After 31 years of service, Brig-Gen Portnoy retired in 2019 from his military service and moved to "EnVizion Medical", a high-tech company, where he served as Deputy CEO until his appointment as DG of the INCD. DG Portnoy holds a bachelor's degree in Industrial Engineering and Design from Shenkar College, and an MBA from Ono Academic College. Mr. Portnoy is married and father of three.