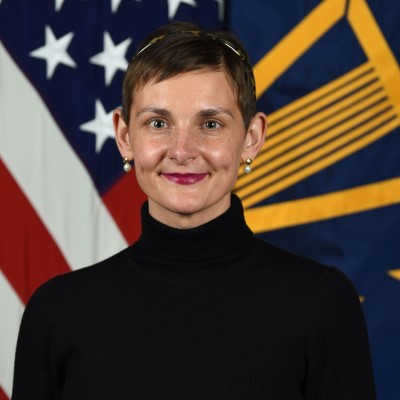 Ms. Katie Savage is the Director of Defense Digital Service and Deputy CDAO, leading the 80-person "team of nerds" based at three locations around the U.S. As a Highly Qualified Expert (HQE), Ms. Savage brings both her government and private sector experiences to DDS. Ms. Savage has grown the DDS team nearly 150%, recruiting top-tier military and civilian talent from around the U.S. while increasing the team's diversity of skills and backgrounds. Ms. Savage also led the acquisition of the Rogue Squadron counter-UAS unit from the Defense Innovation Unit into the DDS portfolio at the direction of Secretary Esper to improve our detect, display, and defeat modalities for small drones. She continues to focus on expanding the DDS product portfolio, ranging from a symptom checking tool for COVID-19 currently deployed around the world to the expansion of our Hack the Pentagon bug bounty program.

Prior to DDS, Ms. Savage led the launch of the City Tech Collaborative in Chicago, a tech organization reinventing essential city services and infrastructure using advanced technology, in partnership with corporations, philanthropies, and universities. She also led the City of Chicagoʼs Plan for Economic Growth & Jobs, developing initiatives ranging from small businesses support to major transit corridor revitalization. From 2008-2010, she served as a U.S. Peace Corps Volunteer in Malawi. Ms. Savage holds a Master of City Planning from the University of Pennsylvania and a B.A. in Political Science and Interdisciplinary Studies from American University in Washington, D.C.

Ms. Savage has spoken about government and civic tech at forums around the world, including UN Habitat in Brussels, the Business of Design Week in Hong Kong, Chicago Ideas Week in Chicago, and the Institute for Competitive Inner Cities in Cleveland. She has received a number of awards for her work, including Chicago Innoʼs “50 on Fire” and FedScoopʼs “Tech Champion of the Year” award in 2020.